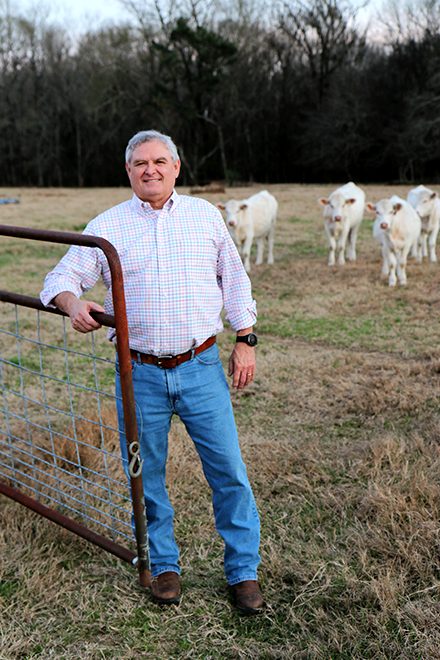 Rick Pate grew up working on his family’s cattle and poultry operations in Lowndes County, where he learned the value of hard work and perseverance. Because of his roots in agriculture, he studied horticulture and received his bachelor’s degree in 1978 from Auburn University’s College of Agriculture.

Pate put his degree and determination to work and started Pate Landscape Co., Inc. in 1982. Under Pate’s leadership, the company has been profitable and award winning. His focus on building relationships in the community through both professional and civic organizations and his commitment to install quality work are what Pate credits his success to. He plans to continue these philosophies during his service as Commissioner of Agriculture.

Even though Pate has spent most of his time operating Pate Landscape, he never let go of his love for and connection to the farm in Lowndes County. He had a purebred Charolais herd of his own, but at the death of his father in 2012, he also took over the family cattle operation, Pate Charolais Ranch.

As if running a company and being a cattleman was not enough to keep him busy, Pate had been raised with the example that each of us has a responsibility to give back. In 1996, he had the opportunity to do just that by joining Lowndesboro’s town council and later serving as mayor in 2004. During his term as mayor, a new well and water tank were added, the water system was expanded, and sidewalks were installed through town. These improvements will be enjoyed by the town’s residents for years to come. He resigned his position as mayor after winning the run-off election for Commissioner of Agriculture and Industries in 2018.

Growing up on a farm, running a business, and serving as the mayor of a small rural town has given Pate a unique prospective to bring to the office of Ag Commissioner. He has a genuine concern for the future of agriculture and the people of Alabama.

Pate has been married to the former Julie Dismukes for 33 years and they have two grown sons, Richard and James.